Do you know the difference? ​ 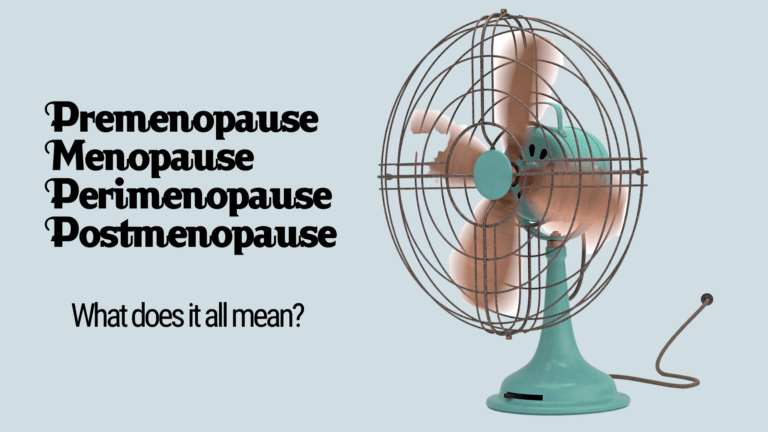 What is menopause? Every woman goes through it. Yet, it rarely comes up in discussion, and even fewer people know what it is or how to help women cope with it. And then you throw in the terms premenopause, perimenopause, and postmenopause, and people are lost! If you are feeling confused, read on to clear the clutter.

All of the terms above represent a life stage for women. The difference in stages is associated with the two primary hormones, estrogen and progesterone. These hormones affect all parts of our body, including muscular and brain health, bone growth, and metabolic functions. I just learned from a menopause conference that estrogen has receptors all over the body. Hence, there are 34 symptoms associated with perimenopause and menopause. Because there are so many estrogen receptors, symptoms such as hot flashes, night sweats, and weight gain occur when estrogen levels change erratically.

Estrogen comes in 3 different forms, but the primary one I will refer to is E2. From now on, I will refer to E2 as simply estrogen. Below are some of the most significant effects it has on the body:

So, with the general functions of the hormones done, let’s look at the difference between these life stages and how hormones can affect them.

Premenopause refers to ‘the reproductive years.

Estrogen and progesterone, while they work in opposing forces, tend to balance each other out during the premenopause stage of life. It is during perimenopause and menopause when estrogen and progesterone fluctuations become erratic. Due to the changes in hormones that occur in perimenopause and menopause, symptoms begin to appear. However, all is not lost. Changing your nutrition and fitness strategies can help navigate this time of life and let you re-gain (somewhat control) what is happening to you. As an example, check out my blog on how to change your exercise routine to see results.

If symptoms become severe enough to disrupt your daily life, nutrition and fitness can still help. However, it may be time to talk with your doctor about menopausal hormone therapy (MHT) and the best course of action to take for you. The North American Menopause Society is a great place to learn more about perimenopause and menopause or find a doctor specializing in menopause.

Get your Free WR Guide:
Perimenopausal and Menopausal Nutrition

Provide your name and email address and you’ll be redirected to the free guide to read, download and/or print.  You will also receive future WR Guide blog posts to help you achieve your nutrition and exercise goals.